Natalie Wood Dates Elvis Presley – By 1956 Elvis Presley became the subject of adoration of many young Hollywood starlets such as Natalie Wood, Judy Tyler, Shelley Fabares & Connie Stevens. However, Elvis’ mother Gladys believed that Natalie Wood was a schemer who hoped to “snare” her darling son only “for publicity purposes.” When a reporter asked if the romance with Elvis was “serious”. Natalie’s coolly answered… “Not right now.” 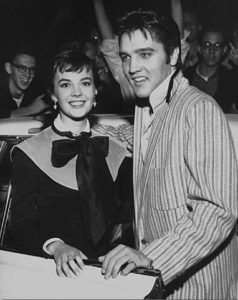 Natalie Wood 20 July 1938-29 November 1981 actress, best known for her screen roles in Miracle on 34th Street, Splendor in the Grass, Rebel Without a Cause, The Searchers, West Side Story… who died young. 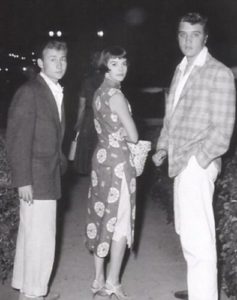 During the making of the film Brainstorm, Wood drowned while on a boat trip to Santa Catalina Island a board the Splendour. Many of the circumstances surrounding her drowning are unknown; it was never determined how she entered the water. She was with her husband Robert Wagner and co-star Christopher Walken on the evening of November 28, 1981.

Her body was recovered by authorities at 8:00 a.m November 29, one mile away from the boat, with a small inflatable dinghy, named the Valiant, found beached nearby. The autopsy report revealed that Wood had bruises on her body and arms as well as an abrasion on her left cheek.