Priscilla Presley Elvis Story Life with and without Elvis – After the birth of their daughter, Lisa Marie Presley nine months later resulted in life of sexual rejection. Elvis felt, according to Priscilla’s testimony in the book, that ‘he just couldn’t have sex with a woman who’d had a child’. When I asked her about this, she revised the record, although the book reports on the end of ‘intimacy’. “Of course we were having sex! I mean, he was Elvis after all, and I must say he was very creative, very playful.” 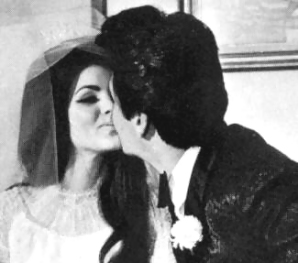 So why did Elvis embargo postpartum intercourse? ‘Oh,’ said Priscilla Presley a little prissily, ‘I guess he had a madonna complex.’ The marriage unravelled, and they were divorced in 1973. “He was still very lovely with me, but only upstairs, when the guys weren’t around to impress. He was a Southern boy, a man’s man, and girls were kept out of sight. The other wives and I were only allowed  Graceland was a court of an absolute monarch, whose nocturnal habits were fuelled by Benzedrine. Priscilla has her own way of describing his manic whims: “Elvis was very spontaneous. It would be, “Now we’re all gonna go horse-back riding, or out on our motor bikes. Or we’re gonna take the plane to Vegas. Elvis would call on the intercom very morning to see who was in the kitchen before he went down to have his breakfast. He didn’t like it if there was someone in the room. Often it was a family member wanting money.’ After their separation, Priscilla watched as Elvis simultaneously inflated and imploded. His body ballooned, choked with cheeseburgers and pint tubs of ice cream, and he hid it behind jewelled capes and jumpsuits; his act became a self-parody. “‘He was terribly insecure by the end. 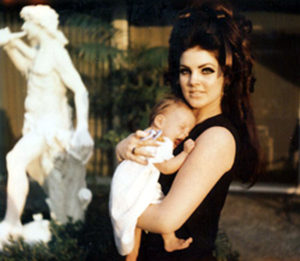 Sometimes they had to curtain off whole areas of seating to make it look less empty. No one could tell him he had a problem, or get him to deal with his addictions. Just think – if he were alive now, he’d be in his early eighties, and remember how good Cary Grant looked that age!’ Premature death ensured his immortality, and led almost immediately to a flurry of reincarnations – the claims in the tabloids that his statue had been found on Mars, the plaster statuettes sold like votive icons, the annual competitions in Vegas for Elvis clones.

After his death, Priscilla Presley conferred another kind of immortality on Elvis: she incorporated him. She set up Elvis Presley Enterprises Inc. which runs Graceland commercial rights to his image; her book, the DVD and CDs are attempts to perpetuate the franchise. “No, I never did anything out of revenge,” she said when I asked about her motives for taking that lover. But her triumph over the man who divorced her has been lucrative. “I loved him, I still love him,” she states. But demolition is also part of the agenda: Priscilla knocked down the house Elvis occupied in LA, bronzed the bricks, then shipped them to Graceland for sale as souvenirs. She speaks about ‘the bigness of Elvis Presley’. What you notice about Priscilla is her littleness and her bemusement at what has happened to her. If Priscilla Presley could look up (which she knows it’s unwise) she would probably be asking the same questions she heard Elvis repeating during his reign: ‘Why me? Why was I chosen? 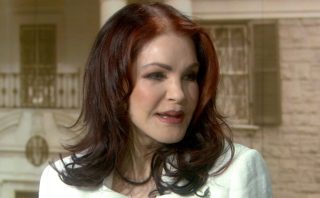