Germany Priscilla Beaulieu Aged 14 Meets Elvis Presley in Germany  – Prisiclla Beaulieu met Elvis Presley Germany 1959 She was 14 he was 24. However, marrying young girls in the southern states of the US was normal practice. As history shows when Jerry Lee Lewis married his 13-year-old cousin.in 1938. This led to the boycott of his London concerts but Lewis continued performing and made a comeback. 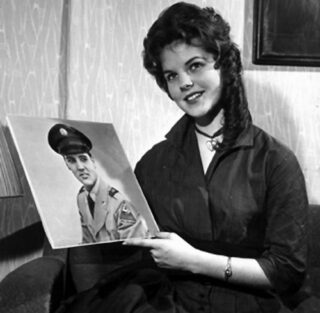 Germany- Priscilla Ann Beaulieu born May 25, 1945. At five foot three inches she captured the heart of Elvis while stationed in Germany 1959. Priscilla was introduced to Elvis by US Airman Currie Grant. Elvis called her Cilla and convinced her to dye her hair black because it made her look more like Debra Paget in the Love Me Tender

Germany Elvis proposed to Cilla on Christmas Eve 1966. Married May1, 1967 E in a private ceremony hold in the Milton Prell’s suite at the Aladdin Hotel in Las Vegas. The couple then honeymooned in Palm Springs, California. February 1, 1968 nine months later Lisa Marie was born in Memphis,