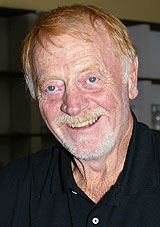 Red West the longtime confidante and bodyguard of Elvis Presley who became a successful film and television actor.  West died July 18, 2017 after suffering an aortic aneurysm at the Baptist Hospital in Memphis. His death comes two months after the death of his cousin, Sonny West, May 2017. His funeral was held Memorial Park Cemetery on July 24

Born in Bolivar, Tennessee, the athletic Robert Gene “Red” West befriended Elvis at Humes High School, where the 6-foot-2 redhead protected the smaller pre-fame Elvis from bullies on at least a couple of occasions, according to Presley lore. He worked for Elvis for some 20 years, occasionally taking small roles in such films as Flaming Star and writing or co-writing such memorable Elvis songs as the 1972 hit Separate Ways, the holiday favorite If Every Day Was Like Christmas and the 1975 masterpiece of infidelity, If You Talk in Your Sleep, recorded at Stax.

Red West Memphis Mafia – Red West interview since  “Elvis! What Happened?” One of Elviss greatest wishes was to do a European tour and to come to England . The closest he got to it was when we were in Germany . Bill Haley was appearing at some auditorium in Frankfurt and we went over, and we were standing backstage. Bill Haley was singing Rock Around the Clock. Elvis just peeped round the curtain for a moment and the whole auditorium emptied right by Bill Haley and chased us out the side door, and thats the closest he ever came to appearing in Europe, but he always wanted to come here. Many of his fans from England came to Las Vegas. He would talk to them and that was one of the things that… the biggest mistakes he ever made, was Elvis not coming here so that you could see him and he could see how much you loved him

Its said, as legend has it, that you rescued Elvis from being beaten up at Humes High when a group of boys wanted to cut his hair. Whats the real story, and was that what happened? 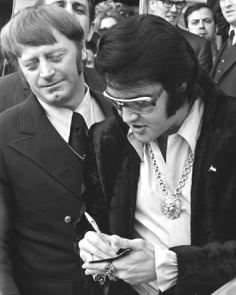 W: That is the real story. The story is Elvis was always different. We had – I’ve got one now – I just did a movie that required me to go back in time but we had crew cuts, wore tee-shirts and blue jeans, Elvis had the long duck-tail, the long sideburns and he wore the loud clothes and naturally he was a target for all the bullies, and one day luckily I walked into the boys bathroom at Humes High School and 3 guys were going to cut his hair just, you know, to make themselves look big or make them feel big or whatever, and I intervened and stopped it, and I guess that stuck because a couple of years later after Elvis had his first record he came over and asked me if I would like to go with him, I think it was Grenada, Mississippi or somewhere, and I went and I was with him from then on, except for a couple of years in the Marine Corps.

Whatever, Elvis and I were great friends. Some things happened that… I want to dwell on the happier times at this get-together because they out-weigh the bad times. We had some good times, some great fun times, and in my opinion theres nobody that will ever compare to Elvis. He was my good friend and Ill always remember him as that.

TS: It must be very difficult to walk in the shadow of someone who is so loved, so adored, so worshiped. Was there ever a time when you felt, “I wish that couldve been me”, or were you happy to be in the shadow, so to speak?

RW: I wouldnt trade places with him for the world. Bull. Anybody would… you know, what he had, the adoration and the money. I mean thats what life is about, I imagine everybody here would like to reach that plateau, to have what he had, and to say “No I wouldn’t trade places with him” – thats a hard statement to make. He had it all except he didnt have the privacy he shouldve had, thats the main thing that happened to Elvis. He was a prisoner of his own career. TS: Was being a prisoner sort of counteractive to what Elvis could’ve actually done? Do you think he was too frightened, or was it instilled in him to be so protected and protective that he dared not go out into the general public?

RW: No, he tried. Even in Las Vegas where people like Frank Sinatra, many of the stars, Sammy Davis – they could go out and pretty well mingle. They could go down if they wanted to gamble or whatever. People didnt bother them too much. But Elvis tried it – once – and the whole casino… everybody stopped playing and came around just to watch and see what he was doing, and he could not get out and do what most people do, and everything had to be at night. And still, I mean he would rent movies at night because he couldnt go to a regular movie, but still the gate was always crowded with fans and they would follow and they would be at the movie when it was over, and it was constant. We were always trying to find different ways to go places but he didnt want to hurt anybodys feelings, but he did wish he had a little more privacy.

TS: Working in an environment where youre obviously expected to be “the great protector”, were you personally always on edge for something untoward to happen?

RW: I guess always, because you never knew, even back in the early days we had our problems. Later on it got to be a real problem because the threat became bigger. You know what happened to John Lennon. Well, this could have happened to Elvis much earlier. In fact there were threats. We tried to keep it under wraps because of the people out there, the copycats, that would do it. We were getting threats in the later years, we took them all seriously. Everybody was on edge. In fact, one night in Las Vegas, we got one before he went on stage and even the management said you dont have to go on stage tonight because this looks real, and he said, “Well, Im not going to stop a show because of some so-and-so making threats”.

But the lights were up in the audience more, the curtains were closer, my cousin Sonny and I were a lot closer and that was one of the strangest feelings I’ve ever had because when he did his last song he went down into a very low karate stance to make him like a small target, and Sonny and I came rushing out and stood in front of him, and we’re standing there waiting for whatever was coming. That is a strange feeling but thats what we were going through toward the end, so a lot of things were happening that people dont know about.

RW: Yes, but he did the show. He said Im not going to be bullied by some idiot like that, you know, and were watching every move, everything that moved in the audience, and sometimes we over-reacted on other occasions maybe, but Id rather I over-reacted than not be there on time.

TS: But were you permanently hyped up? Were you always on edge, expecting the worst?

RW: Always. Always. Especially after these things. We saw what happened to people by not being prepared, or not thinking things could happen, so we were always ready as we could be.

TS: Lets go back to the early days. When did you first talk to Elvis about him being signed up by Col Parker? Were you aware what was going on at that time?

RW: No, not really. I had nothing to do with that. I was just having a good time and I saw that the Colonel had a lot more influence and a lot more experience in that field than the people who handled Elvis before, so things started immediately he went to RCA. He did the Jackie Gleason Show with Tommy & Jimmy Dorsey which made him visible to the world and not just around so I knew that something big was happening but I didnt know it was going to be as big as it became.
In the early days, did Elvis Presley mix with lots of other stars, or did he tend to keep apart?

RW: No, when he was doing the tours with the Browns, Hank Snow and when he did the Louisiana Hayride Johnny Horton, George Jones thats a funny story, before I forget it! Elvis had 3 hit records. He was doing the Louisiana Hayride and George Jones went on right before him and George Jones, who was probably put up to it by Johnny Horton and the rest of the old-timers, he did all 3 of Elviss hits. Were standing backstage watching this and George came off, said “Im sorry, I havent had a hit in a long time” and he walked off. Elvis went out and sung 3 gospel songs, came off and said, “Lets get the hell out of here”. That was funny! Not at the time, but later on we laughed about it.

TS: Elvis obviously worked with these people, but did he socialize with them?

RW: Oh yeah. We have a picture at home. The Browns, they were a country group, brothers and sisters. They had a hit called “Little Jimmy Brown” and we have a picture at home of them celebrating their father and mothers wedding anniversary and around the table was Hank Snow, Junior, Floyd Cramer, this was a whole musical group. He hung out with them then.

Later on, it was different, but when he first started out he liked to hang out with those guys -Jimmy Horton and those guys. Wed go out to dinner after the show, but later on he kinda stayed by himself.

TS: Was there a time when you thought that Elvis made a conscious decision that he couldn’t go out any more, he could no longer go to the local hamburger place, to shop, to do anything that normal ordinary people have the opportunity to do. Did it come all at once, or was there a gradual learning that there were going to be problems?

RW: I think it was gradual. When he started making the movies it became even more evident, became more of a visual thing that people would come around to see him, and thats when it really started that he couldnt even go out the gate and wed go the back way out, jump over the fence, whatever, but when the movies started after Love Me Tender it became pretty hard to go out in public.  Thats what I always wanted to do, but no, I would never have made it without knowing him because the people I met with him were the ones who helped me get into it when I came back early from Germany and went directly to Hollywood. Its what I always wanted to do but knowing him opened doors that would never have been open, so Nick Adams – I dont know if you remember Nick Adams – did a series called “The Rebel”.

He was a friend of Elvis and I went to Hollywood and met him. He helped me get into the first door and then Robert Conrad who did “Hawaiian Eye” and “Wild Wild West”, we played football every Sunday when Elvis got back and all those people would come out, Pat Boone I met these people and ended up working with them so, no, everything I got I owe to Elvis.