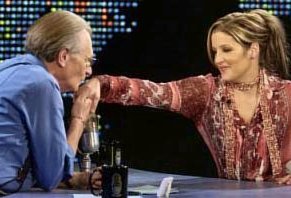 Sale of Graceland KING: You sold 85 percent of the Presley estate, and it got a lot of controversy. Explain why you work out of love of working. You’re not working for income?

LISA MARIE PRESLEY: Right. I work because I think that I wouldn’t feel good about myself unless I was contributing. It’s not as selfish — I’m not a vain or self-centered person in any sense, but I feel like I need to contribute. I am involved in — prior to singing, in a lot of different, you know, family housing, educational programs. I’ve gotten involved in, you know, stopping the — anti-drugging of kids campaigns. But for me, music is just another outlet.

LISA MARIE PRESLEY: It’s very complex. People couldn’t get past the headlines. We sold 85 percent but it looked like I sold everything.  And I’m going no, no, no, no. Business-wise, we’re getting a huge thumbs-up, that was an awesome move. But personally, it just came across wrong, because estate sold sounds like estate. Estate is mine.

KING: How big is the tourism industry there at the estate?

KING: Graceland draws people? The interest in him seems to grow.

KING: As his daughter — and you were only, what, 9 when he died… How do you appreciate his talent?

LISA MARIE PRESLEY: God, you know, there’s a documentary coming out… in May. It’s called “Presley by the Presleys,” and I’m normally not involved in things like that, stayed away from it, but this is done so well that — it’s done in only his voice, my mom’s mine, my grandparents, his mother. You know, it’s through all of our voices. So it’s not someone narrating.

KING: “Presley by the Presleys.”

LISA MARIE PRESLEY: Yes. It’s quite fascinating. And I learned so much about him actually watching — because there was footage pulled that no one’s ever seen. Which is interesting. It’s going to be for television. I think it’s a CBS special.

KING: What do you think as you look at him, hear him? I mean, you are (ph) the daughter. What was that appeal, what did he have?

LISA MARIE PRESLEY: You know, what he had was completely uncontrived, and you know, what he was, was what he was. There was no — like nowadays you have machines and PR, you know, images being created and you have all these things going on and a lot of people working to create different things. And with him, there was none of that. There was nothing — everything you saw and people appreciated about him, he was that or more off stage, and there was nothing contrived or preconceived about anything he was about or did. And I think people feel that genuineness, and that doesn’t happen very often anymore.

KING: How is your mom doing?

KING: After Elvis died, it was either sell Graceland or give it up to the state.

LISA MARIE PRESLEY: And to go there now, it’s like comforting to see it in its original form and never touched, you know. And on the other hand, it’s sort of, you know, heartbreaking to go there and look at — it’s just a shell now of what was. It’s a house now. It’s not the home that it was, but trying to recreate that without Elvis, it really isn’t a home.

Sale of Graceland | Who Owns Graceland?