For a man who says “I never set out to be a biographer,” music historian Peter Guralnick has done pretty well. His 1994 two-volume Elvis Presley biography “Last Train to Memphis” and “Careless Love,” is considered the definitive telling of the King’s life story among dozens if not hundreds of other writers’ books devoted to Presley’s life and music.

And now he’s just published his book on a man who is neither a household name in the world of popular music nor even a musician but who arguably deserves as much credit for the birth of rock ‘n’ roll as anyone else: Sun Records founder Sam Phillips.

Sam Phillips to be inducted into the NATIONAL RADIO HALL OF FAME at their  18th annual induction ceremony. Approximately 350 radio executives, personalities, and celebrities were at the affair November 6th, in Chicago.

Rare interview with Sun Studio founder and sound engineer, Sam Phillips had entertained a steady stream of local black talent, most of whom had never seen the inside of a recording studio. In 1951 Phillips recorded local disk jockey and aspiring blues artist B.B. King and shortly thereafter recorded “Rocket 88” by Jackie Benston and Ike Turner often cited by music historians as the first rock and roll record 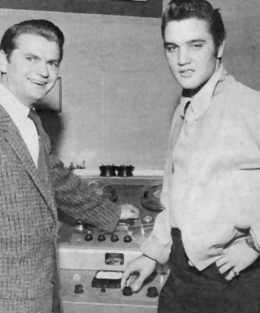 hen in the summer of 1953 a painfully shy young truck driver wandered in to record a couple of sentimental songs for his mother. He hung around over the next few months, and Phillips made a mental note of the young man with the strange name and even stranger appearance, Elvis Presley.

There was something in that voice, he thought. Phillips was solicitous of just such unpolished talent. Indeed, he had staked his tenuous fortune on the artistic enfranchisement of the poor and the racially marginalized–those who had never had the opportunity to record. Phillips mentioned Presley to a couple of session men and finally decided to call the kid in. 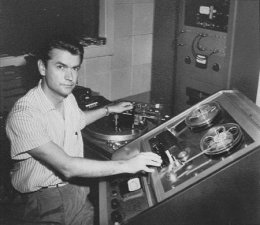 fter a lack-luster afternoon performing a repertoire of pop songs and ballads, Presley idly picked up his guitar and began to play around with a blues song, “That’s Alright Mama.” This anonymous moment with the microphone turned off could so easily have signified nothing.

“I was surprised Elvis even knew the song,” Phillips later said. No matter. What he heard, and what he understood about what he heard, changed American musical history. For he saw that Presley infused the simple country blues with an emotion and legitimacy that defied classification…

Sun Records founder Sam Phillips, legendary producer, founder of early rock and roll and talent scout is honoured by his induction into the Country Music Hall of Fame.  “For years they had a hard time deciding whether I deserved to be in the Country Music Hall of Fame,” Phillips said from his home in Memphis. “I quite understand that, I really do. … Deserved or not, thank God I made it.”

Phillips, 78, earned country music’s highest honor by introducing the world to Elvis Presley and Johnny Cash (who are also honorees of the Country Music Hall of Fame) as are Jerry Lee Lewis, Roy Orbison, Carl Perkins and Charlie Rich just some of them made their first, and best, recordings for Phillips. Unlike most commercial country music of the ’50s, the pioneering rockabilly recordings Phillips oversaw at Sun were infused with spontaneity and energy, and they incorporated elements of rhythm & blues. “Turn Around,” an original by Perkins, was one of Phillips’ earliest and best straight-country productions. Recorded in late 1954, it features fiddle and steel guitar and owes a measure of debt to Hank Williams in its composition and execution. “Many things were being done in Nashville at the time that I thought were good. I really didn’t have a desire to outdo Nashville — or New York or Los Angeles.  “I just had my own feelings about the blues and, especially, Southern white and black gospel,” admits Phillips with the grand flare of a Southern preacher.”

Raised on a tenant farm outside of Florence, Alabama, Phillips emphasizes that Southern rural music (including country, blues and spirituals) laid the foundation for many other forms of American music. “The Country Music Hall of Fame is the embodiment of that impact,” he said. “My induction therein shall have a glory for me personally [that] I never experienced before.”

Sam Phillips looks at his plaque in the Country Music Hall of Fame, Oct 4, 2001, Nashville, Tenn. Phillips died at the age of 80 – July 30, 2003 a ceremony to designate the Sun studio. One of Memphis’ most popular tourist attractions as a  historic landmark had been scheduled to take place just one day after his death. The designation is a first for a recording studio.   Million Dollar Quartet