TEMPEST STORM DEAD at 93 – Tempest Storm, iconic burlesque performer who dated Elvis and ‘had an affair with JFK’, dies aged 93… after a short battle with dementia.

The performer, who dated Elvis Presley and reportedly had a fling with President John F. Kennedy, passed away in her Las Vegas apartment on Tuesday.

Born in Georgia, Tempest Storm (her stage name) went on to star in burlesque shows on the west coast and in Las Vegas, appeared in movies and became a sex symbol in the ’50’s and ’60’s.

Her boyfriend for a time? Elvis Presley.

“Elvis the Pelvis,” she laughs. “It was 1956. I was appearing at The Dunes Hotel in Las Vegas, which is now the Bellagio. We had a burlesque review and he came to see the show. He came over and sat down – he had the most beautiful eyes – and we got into a relationship and it was absolutely fantastic. He was a real Southern gentleman. Very polite….. I’m very honored that I got to know JFK and Elvis,” she continued. “I have great memories of them – private moments we had. Both gentlemen, absolutely. Wonderful men.” 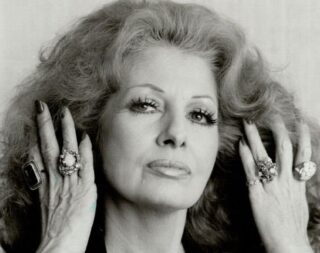 Excerpts from the book The Lady Is A Vamp, published in 1987 by Peachtree Publishers…. (During his Vegas Concert Elvis when to Tempest Storm’s show and decided he had to meet her) Elvis and I became almost inseparable. We dined together, danced together and laughed together. As much as I enjoyed the feeling of power that came from having the idol of millions idolise me, I also felt real compassion for Elvis. I understood the pressures of being a star, of having fans who felt that your onstage persona was theirs for the asking offstage. I also knew what it was like to be constantly concerned about your image, to calculate the effect of every appearance, onstage and off. So gradually, I felt myself growing closer to Elvis.

(After a few dates) The one thing Elvis and I had not done was make love. When I received a late-night phone call from him, remembering our past conversations, I didn’t have to be a mind reader to know what he wanted. “Tempest, honey, I’m busting out of here tonight, and I want to see you. Real bad,” he said. I had been coy long enough, so I consented. But still concerned with my image, I added, “You can’t come through the lobby. No man has ever been seen coming to my suite, and I’m not going to start with you. “That’s just as well,” he said. “Colonel Parker is raising hell about us already, and I’d rather come in the back way.”
I reminded Elvis that there was an eight-foot security fence behind the hotel. he said he would climb the fence if I would just tell him where my suite was located. I promised I would open the drapes and turn on some lights so he could see me. Then the phone went dead. Elvis – God, what magic that name bore!. Even though I wouldn’t have admitted it to anyone, I was thrilled at the prospect of what the next few hours might bring.

I stood before the mirror and admired the negligee I’d bought in Los Angeles a few weeks before. I loved it. But I decided that it wasn’t sexy enough for Elvis, who was only twenty-one at the time. So I changed one more time – to a blue shorty that would show off my legs better. After all, if Elvis Presley was going to leave his security men behind and climb a fence behind my hotel, I wanted him to remember – for all time – that first glimpse of me when he came around the swimming pool and looked through my patio door. Perhaps fifteen minutes after Elvis hung up the phone, I saw a leg slide over the top of the fence. Then he stopped, hanging comically with one leg at the top of the fence and the other pointing toward the ground. Obviously, he was hung on something. I couldn’t help from smiling at the sight of my glamorous date’s daring arrival…..I’ll never forget that naïve country boy’s saying, “Well, I’m as horny as a billy goat in a pepper patch. I’ll race you to the bed.” He grabbed my hand and started toward the nearest door. I told him that it led to the hallway. He swore and turned toward another. I said that was the bathroom door.

He smiled, and Stormy started growling to let me know she wasn’t happy to have a visitor…..I nabbed her, dropped her into the living room and closed the door before she could scamper back into the bedroom. She immediately started whining and scratching at the door. our romantic evening was about to turn into a silly comedy sketch. Elvis complained about the distraction, but he wasn’t distracted for long. I knew how to turn the tone back toward romance. He was the impatient lover that night. As the sounds of lovemaking grew more intense, so did Stormy’s growling and scratching. Later, we lay side by side while our breathing slowed As with any lovers, for Elvis and me these special moments after lovemaking were the time for talking, for sharing feelings, for holding on to that feeling of closeness the physical intimacy helped to create. He kissed me and said he wanted to be with me as often as our schedules allowed, but he’d have to be careful because Colonel Parker was in a huff about me.