Cadillac Cars, Sport Cars and Limousines were Elvis’ lifelong passion Elvis Presley sold the 1971 De Tomaso Pantera Sport Car in 1976 It went through a number of owners. In 1981 the car was purchased for $2 million The Pantera was the idea of an Argentinian racing driver, the fiery Alejandro de Tomaso. He settled in Modena, Italy, in the 1950s, with American wife Isabelle Haskell, also a racing driver, to form their race-car-building concern in 1959. De Tomaso produced a string of sports racers and F2 cars, and then they dipped their toes into production-car waters, using primarily Ford engines. 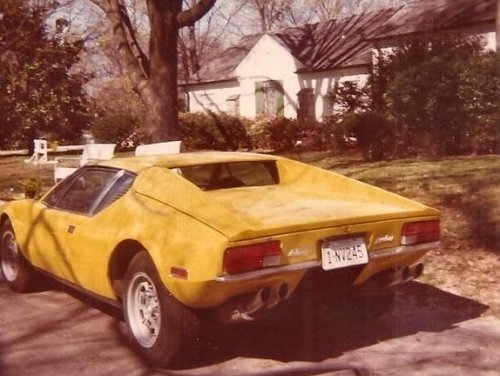 Their first model was the central spine-chassised Vallelunga, then the Giugiaro-designed Mangusta, which the mid-engine Pantera superceded in 1971. Designed by Tom Tjaarda, engineered by Gianpaolo Dallara and powered by Fords 351 Cleveland V8, a relative of the Mustang Boss 302, the Pantera was imported into the United States from 1971 until 1974 and sold at Lincoln dealerships. It was called by one magazine an exciting, but an unfinished product.

Elvis shot this yellow Pantera with his personal firearm during a temperamental outburst when he lost patience because the car would not start. The car sustained several bullets. One into the tire, one in the driver-side door and the last bullet went through the steering wheel.  Elvis bought this Pantera for $2,400 in 1974 for his girlfriend, actress Linda Thompson. Although its mid-engine configuration qualified it an ‘exotic car’ for its potent Ford engine.