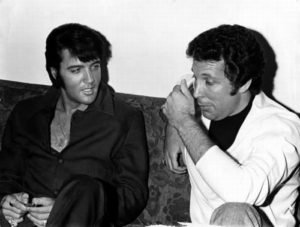 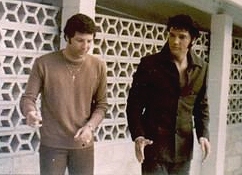 Tom Jones Visits Elvis Presley at Graceland…Tom Jones and Elvis Presley at Graceland… On August 1974, Elvis gave a big introduction to Tom Jones, who was catching one of his shows: ‘There’s somebody in the audience I’d like you meet. To me … he’s my favorite singer. He’s one of the greatest performers I’ve ever seen, and the greatest voice, Tom Jones. There he is. He’s too much. Tom, you open at Caesars palace tomorrow night, right? Folks, if you get the chance, go over and see him. Elvis always came to see my show and I’d go to see his. It’s a mutual respect’…

Tom Jones remembers Elvis: “When my singing career had taken off, with three hit songs, I went to Paramount Studios to talk about recording a song for a movie and someone told me that Elvis was filming on the neighboring sound stage and wanted to say hello…. I thought to myself, ‘Oh, my God! Surely Elvis Presley doesn’t know who I am’. But I walked on the set, where he was sitting in a helicopter, and he sort of waved in my direction. I couldn’t believe he was waving at me, but I waved back, just in case. Then he came over and said he knew every track on my album and he sang one of my songs, With These Hands, all the way through. He said to me, ‘How the hell do you sing like you do?’ And I said, ‘Well, you are to blame, because I listened to all your records in the 1950’s… He told me that when he heard me singing What’s New Pussycat? on record, he thought I was black. I thought that was a bit ironic, as I’d thought he was black when I first heard him singing.”