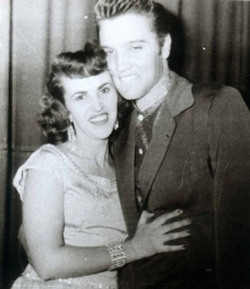 Fifty years to the day after she recorded her signature hit single Let’s Have a Party in 1956, Jackson is still doing all of these things. Maybe that’s why, as absurd as it sounds, she still isn’t in the Rock and Roll Hall of Fame

Wanda still tours and over five decades has sung alongside Elvis Presley and Elvis Costello. Her version  of   Good Rockin’ Tonight is a tribute to Presley classic she commemorates on her latest CD – I Remember Elvis.

Unlike so many curled-lip pretenders to the throne, Jackson toured with Presley. She also dated him (“I still have the ring, Elvis gave me,” she said ) As a fledgling country singer was encouraged by Elvis to try her hand at this newfangled thing called rock ‘n’ roll. She took his words to heart.

Strumming a pink acoustic guitar, Jackson renders Heartbreak Hotel  to a sexy smoldering I Forgot to Remember to Forget with a restored second verse the King had originally omitted. The diminutive singer is not merely an interpreter of other people’s material, but a songwriter equally at home with gospel, pop, and country.

Wanda Jackson talk about working with Elvis Presley when his career first started to take off.
“In 1957, it had already gotten to where he and I couldn’t go out and get a Coke or go to a movie, because people would follow us,  I just felt sorry for Elvis. It was like he had created a monster. It was at that point that he had to stop his autographing, because the fans would get so rowdy. It was hysteria. 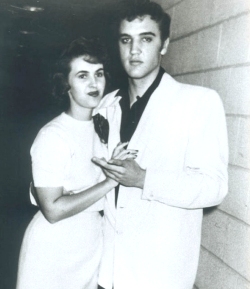 Jackson didn’t generate the same frenzied reaction in America, although she did have a smash hit with “Let’s Have a Party,” which was taken from the Presley film Loving You.  The reason has nothing to do with her music, which was every bit as powerful and edgy as the sound of the era’s male rockabilly titans. “America just wasn’t ready for a female screaming,  hollering, twisting and singing like that,” she says.  “Nowadays, the more you do it, the better. It was frustrating that I couldn’t get the airplay and record sales. That’s why I jumped from rockabilly to country so much.

Jackson started as a country singer, and earned her own radio show in Oklahoma City as a teenager. She recorded for two years on the Decca label before meeting Presley.  Despite the obvious promise she showed in her original genre, he convinced her to change her style.

“Elvis was the one who first encouraged me to try rock. When I first started working with him in the summer of  ’55, he was not nationally known. In fact, I had never heard of him when we went on our first tour. But I worked with him for a couple of years, and we dated when we had the opportunity. I still have a ring he gave me that I wore around my neck for a couple of years. Elvis told me that (rock) was going to be the next big music, which I could tell that it was. The girls were screaming and crowding the stage, and I’d never seen anything like that. My father also said that I should try my hand at it. Elvis said,  “You can do anything you want to do.”‘

After Let’s Have a Party Wanda’s  next hit, Right or Wrong marked a return to her country roots. While she hopped from genre to genre in America, fans in Europe remained loyal to her rockabilly material.

“I’m not really sure why people over there enjoyed the music more. For some reason, they liked the simplicity of it, the energy that was in it. We sang about driving in cars, listening to radios and going dancing. It’s just clean, innocent music.” Only recently have music writers and fans bestowed the “rebel” label upon her.

“I never had anything like that said about me then. My father traveled with me all the time, and I had a very good reputation. I never heard anything about being a rebel. Now, in retrospect, I look back and say, ‘Yeah, I was.’ I wouldn’t let them pigeonhole me. But I broke out of the mold of a girl singing country music with cowboy boots, full skirts and a guitar.”

Jackson doesn’t have to look far for fans, musicians and writers that are willing to give her this credit. Stars such as: Tanya Tucker and Rosie Flores have named her as a major influence, and Rolling Stone featured Jackson in its Book of Women in Rock.

“I get a lot of good strokes. In fact, it can get to be a pretty heady thing. I have to be careful to make sure that I can find a hat that fits me, you know? But it’s exciting to see such talented young people telling me that I’ve influenced them.”

Although Jackson has recorded 18 albums in German and several other languages. Her German recording of “Santo Domingo” topped the charts in six different German speaking countries and remains immensely popular and receives the star treatment in Europe, with private cars and lush hotel suites.

“That’s one song I include on the set list for every show when I go overseas. It’s become what we call a standard. They call it an evergreen. No matter what the age of the people in the audience, they know that song. They sing it with me and they hold up their cigarette lighters, and it’s really touching.”

Wanda’s Film “The Sweet Lady with the Nasty Voice” won The Founders Award (THE VERY BEST OF SHOW) at Oklahoma’s biggest Film Festival called The Dead Center Film Festival. Joanne Fish was there to accept the award as one of the producers. It has really shaped up and we are proud of it. Hope you get to see it before long. Be good and may God bless. Love Ya,  Wendell Goodman  www.wandajackson.com