WILL HUTCHINS We all was knew him Sugarfoot – Will  Hutchins  co-starred with Elvis  in Spinout & Clambake – Born in L.A.B.S. (Los Angeles before smog) prefers to be called Hutch He attended Pomona College and UCLA and spent two years as an Army Cryptographer in Paris Somehow, this all led to a contract at Warner Bros, where he starred in TV’s “Sugarfoot” – Will Hutchins

After five years Jack L. Warner shipped Will Hutchins to the Philippines to re-fight World War II in Marrill’s Marauders….  Hutch spent two years on the road and on Broadway in the play “Never Too Late.”

Then in 1966 he co-starred as Lt Tracy Richards with Elvis in Spinout and as Tom Wilson Clambake 1967 Spinout With three women (a spoiled rich girl, a man-hungry author, and his band’s drummer) out to snare him, race car driver/singer Elvis Presley sure has his hands full in this one! With Shelley Fabares, Diane McBain, Will Hutchins, Carl Betz.

Clambake Hey, Elvis, toss another clam in the pot! Here Elvis plays a bored Texas oil heir who switches places with a water-skiing instructor for some tuneful action. With Shelley Fabares, Bill Bixby and Will Hutchins. Elvis sings, “The Girl I Never Loved” “Who Needs Money” & more. 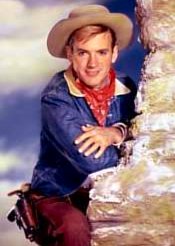 Then ran away and joined the Circus for two years as a Clown and Ringmaster. For five years he worked for the Theatre Arts Program of Los Angeles, presenting free shows throughout the City. Africa was still in his blood, so he acted in Tippy Hedren’s flick, “Roar!” in the wilds of the San Fernando Valley with cast that included wild animals. Before the critics could clobber him Hutch skedaddled Down Under to Australia, where he traveled for four years with “Ashtons’s 163-Year-Old Circus” as “Patches the Clown.” On the way home he basked in the wonders of Singapore, Shi Lanka, and Majorca.

Recently, he starred in two Westerns for Christopher Coppola, “The Great Bar 20” and “Gun Fight at Red Dog Corral.” His biggest regret? He never learned to play the Alto Sax or worked as baggy pants comic in Burlesque. He devoutly believes that the West shall rise again…

HOW MUCH OF AN ELVIS FAN WERE YOU BEFORE YOU CO-STARRED WITH ELVIS?
Will Hutchins : Oh – I was a big Elvis fan! I had all of his recordings and played his stuff at my LA parties!

WHAT WHEN THROUGH YOUR MIND WHEN YOU GOT THE NEWS THAT YOU WERE TO WORK WITH ELVIS?
Will Hutchins : I’m worthy to work with this man and also I HAVE A JOB!

DID ELVIS KNOW YOUR TV WORK AS THE COWBOY SUGARFOOT?
Will Hutchins : I’m happy to report that he was an big fan of little old “Sugarfoot.” I thought maybe he was just being nice but Elvis talked about the story lines and everything. He was an honest genuine guy!

WHICH MOVIE WAS BETTER TO WORK ON WITH ELVIS, SPINOUT OR CLAMBAKE?
Will Hutchins :Clambake was the best project that I worked on with the King. I played a bigger part and had more fun than any other movie project. Clambake was one BIG long party great party. And Spinout was a fun project but more structured.

WHERE YOU EVER INVITED TO ELVIS HOME WHILE WORKING WITH HIM IN HOLLYWOOD?
Will Hutchins :No:-( But my wife and I toured his home, Graceland after his passing. The world lost a great talent and wonderful person.

WHERE AND WHAT WERE YOU DOING THE DAY YOU HEARD THE NEWS THAT ELVIS HAD DIED?
Will Hutchins :I was in LA on the beach. What a sad day that was:( But we have his work to remember him by and I have the great memories of working with this wonderful and kind man.