Women Elvis Presley Dated From CoStars to Movie Stars  Elvis Movie were often became real -life affairs  which lifted by the on-screen chemistry between Elvis and his co-stars, Ann-Margret, Juliet Prowse, Debra Paget, Anne Helm were all on his arm at one point, while Priscilla was waiting at home.

Not that their relationship was entirely chaste in pre-wedding days. Elvis spent hundreds of dollars on Polaroid film, snapping Priscilla and her girlfriends cavorting around Graceland in their training bras. Elvis also adored to fondle and suck women’s toes, and those in his entourage who were given the job of choosing companions for him would often be asked to check the girls’ feet. Small and delicate was the Presley ideal and at least two girlfriends reported having been given the nickname ‘Bitty’ by Elvis in honour of their ‘itty-bitty’ feet. 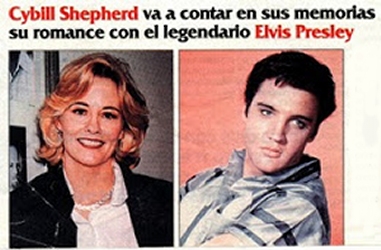 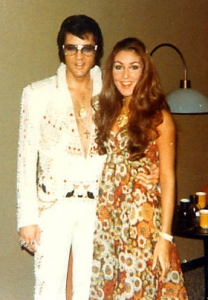 Anita had a lot in common with Elvis. Like Elvis had moved to Memphis as a teenager from a rural area of Tennessee where she was born. The first meeting of Elvis and Annie (as he sometimes liked to call her) was set up by a mutual friend as a blind date. Elvis and Anita spent a lot of time together in Memphis before his career took off. They would usually spend their dates at the movies, the skating rink or a place they both loved, Libertyland. While dating Elvis, Anita also got to know Mrs. Presley very well. The two got on famously, probably because of their similar background. Anita would recall that Mrs. Presley half expected her and Elvis to marry because they were so close and that she just couldn’t wait to see their little children walking up the driveway. As the film career kicked in they didnt see too much of each other and thats where the movie magazine started to report Elvis affairs with his leading ladies. As 1958 came so did the army and Germany. Anita and Elvis exchanged Love letters at the time but it was here where their they  parted and a new name suddenly entered the headlines Priscilla Beaulieu.

When Elvis returned from Germany little was mentioned of Priscilla so it was presumed that she was just another name for his little black book.  One thing which Elvis did say about Priscilla was the when he first saw her he nearly fell off his chair because she looked so much like, Love Me Tender co-star, Debra Paget. If you look back you can immediately see the resemblance. 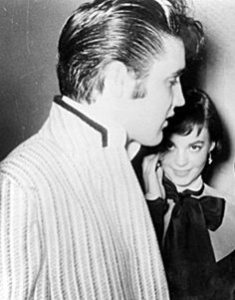 When Elvis arrived in Hollywood the first actress he dated was Natalie Wood of “Rebel Without A Cause” fame.  They met when Elvis was asked by  Nick Adams who he met while making Love Me Tender to make up a foursome.  Elvis and Natalie began to date. Being seen at cinemas, hamburger joints as well as riding on Elvis’ Harley Davidson.  Natalie later recalled that once when they returned to Elvis home at Audubon Drive after a ride they couldnt get up the driveway because of the crowd of fans. After Elvis promised to sign autographs for them if they let him up to the house.  Finally when they did get into the house Natalie though that Elvis would shirk his word. However, Elvis returned to the fans as promised. Telling Natalie that his word meant for something and if it wasnt for them he wouldn’t be there in the first place. Natalie was blown away by Elvis consideration, so unlike other Hollywood movie stars. Soon after there were rumors that Elvis and Natalie would be hearing the sounds of wedding bells. However, Natalie quelled the press with, “Elvis was the only real boy I have ever met But we are both career mindful and at this time we both are committed our film contracts.”  Some speculate that the Colonel Tom Parker intervened, and in hindsight this may have been another factor. As a fan was quoted as saying at the time, “Elvis is just one big hunk of forbidden fruit!”

Juliet Prowse was regarded as Frank Sinatras  girl landed a “dont call again” message to Elvis while hinting that Frankie was getting sore at their friendship on the set of GI Blues.  A magazine compiled comments from several of Elvis’ leading ladies. Here is what they had to say: “He’s a very well-mannered and sensitive person” Ursula Andress. “He is a gentleman and he knows a lady when he sees one,” Ann Mobley. “Best of all, in spite  his success he was unassuming,” said Connie Stevens “As to Elvis entourage I get along with every one of them.  Any girl who wants to date Elvis knows she has to get along with the boys. The trouble is girls resent this… They want to get Elvis all to themselves.”